Williamson succeeds Daniel Dennis, who is departing the company and moving to Florida. Williamson joined Roberts Brothers in 2009 as a sales associate and subsequently purchased the Roberts Brothers Saraland franchise three years later. She was promoted to general manager and, as Managing Broker of Roberts Brothers West, escalated the office to unprecedented success.

As president, Williamson will set the company’s strategic vision and oversee the operation of its 300 sales associates and staff in seven offices.

Williamson becomes the first member outside the Roberts family to lead the 75-year, historic brand noted Dennis. “In addition to being respected by everyone, Teresa has the leadership, communication skills, and talent to escalate Roberts Brothers to even greater heights. She is a homerun for our sales associates, employees, buyers, and sellers,” added Dennis. “I am thrilled to continue to work with this immensely talented team of agents, managers, and staff. The opportunity to lead this iconic company to its next level of growth and performance is both humbling and exciting,” said Williamson.

“Teresa is a talented industry veteran who brings extensive knowledge and exemplary leadership qualities to Roberts Brothers,” said Gino Blefari, CEO of HomeServices of America, the parent company to Roberts Brothers. “I am confident that the company is well-positioned for the future under her leadership.”

About Roberts Brothers, Inc. World War II veterans John and David Roberts started the company in their parents' garage on Williams Court in midtown Mobile in 1946. Celebrating its 75th anniversary in 2021, Roberts Brothers remains the leader in the Mobile Bay real estate market with nearly 300 team members in five offices, providing brokerage, relocation, vacation rental, and property management services. In 2021, the company was awarded the #2 spot for “Best Companies to Work for in Alabama” by Business Alabama magazine. Additionally, Roberts Brothers was recognized as the “Best Real Estate Company” in the 2021 Nappies by Lagniappe. Roberts Brothers is owned by HomeServices of America, a Berkshire Hathaway Energy company, and the #1 ranked real estate company in the United States. For more information, visit www.RobertsBrothers.com. 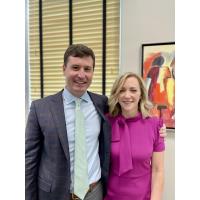