Daphne, Ala., March 10, 2022 – Six middle school students from Bayside Academy competed in the Alabama Conference of Theatre's Theatre for Youth Festival on March 5th in Montgomery. This was Bayside's first theatrical competition, and the girls represented the school well, receiving four medals of Excellence and nine Superior medals (the competition's highest scoring category). All Bayside students received Superior marks in their acting events. Listed below are the students, their events, and their accomplishments:

All six of these students prepared their pieces while also being involved in Bayside's spring play rehearsals and hope that our community will come cheer them on in The Little Mermaid, Jr. March 24–27 in the Pilot Center Theatre on Bayside’s campus. Tickets are available now at www.baysideacademy.org/performing-arts.

We are so proud of all of these students! 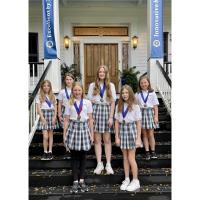