“Tickets for the 2021 Bald Eagle Bash sold out just days after they went on sale,” Diana Brewer, Development and Communications Coordinator said. “We have no doubt the 12th annual Bash will do the same. We are so excited about having Ross Newell play the first hour. He has a huge following from his days with the Mulligan Brothers, which was one of the most popular bands to play at the Bash. And Paw Paw’s Medicine Cabinet, with their cool indie pop and rock sound, is going to be a blast!”

This “taste of the Gulf” brings together 16 local restaurants and chefs preparing fresh shrimp dishes. Several restaurants will serve tasty desserts. And for the first time, there will be a non-shrimp option.

Fairhope Brewing and Braided River Brewing will once again be serving their signature beers, and two wine distributors will serve a selection of wines. 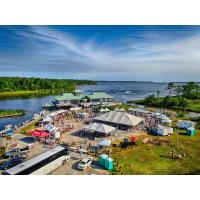