(Mobile, Ala.) Spring Hill College has announced that District One Mobile County Commissioner Merceria Ludgood will be the commencement speaker for this year’s ceremony on Saturday, May 7, at 9 a.m. on the Avenue of the Oaks. The full schedule of commencement activities is available here. The ceremony will also be live-streamed.

Commissioner Ludgood is an accomplished attorney and civic leader and has served as the county commissioner for Mobile’s District One since 2007. Her life’s work and experiences are a testament to her personal motto: “To whom much is given, much is required.”

“We are honored to have Commissioner Ludgood as our commencement speaker this year,” said E. Joseph Lee, Ph.D., the president of Spring Hill College. “With our focus on civil rights and social justice, her life’s work is a testament to our Jesuit principles of caring for each and every human being.”

Ludgood grew up in Mobile’s Crichton community and was educated in its public schools. She attended the University of Alabama in Tuscaloosa, where she received her Bachelor of Science in 1974 and her Master of Arts in 1976. She graduated from Antioch School of Law in Washington, D.C., in 1981. She began her law practice in 1981 with the firm Figures, Irby and Ludgood. In 1991, became executive director of the Legal Services Corporation of Alabama, and later joined the staff of the national office in Washington. After returning to Mobile she joined the in-house legal staff for the Mobile County Commission.

She was elected to serve residents of Mobile County Commission District One in October 2007. In August of 2014, she was elected president of the Association of County Commissions of Alabama (ACCA). She is a member of the board of directors of the National Association of Counties (NACO) and has represented 12 Southern states on the NACO Executive Committee.

Ludgood launched Engaging the Next Generation, which promotes volunteerism among 22- to 40-year-olds, and was recognized as a Young Professional Hero by al.com for her role as a mentor to young adults interested in social justice. Her commitment to developing the next generation of leaders was exemplified in her tenure as dean of the 2018 class of Leadership Mobile. She also started a summer internship program that has served more than 350 young adults.

Her current focus is improving Mobile’s quality of place, pushing for investments in green space, access to water, neighborhood revitalization, and curating the story of African-American contributions to the region. Ludgood convened community members to establish the Mobile County Community Remembrance Project of the Equal Justice Initiative (EJI) with the goal of creating local memorials to individuals lynched in Mobile County during the Era of Racial Terror from 1877 to 1950.

She is an alumna of Leadership Alabama and was awarded the W.K. Kellogg Foundation National Leadership Fellowship, with which she explored leadership among women leaders in the African diaspora. Ludgood participated in the Governing Institute’s 2017 Women in Government Leadership program.

Ludgood has been recognized as a Women Lawyers Trailblazer, inducted into the Alabama Lawyers Association Hall of Fame, designated as a Living Legend by the Crawford Bay Area Bar Association and received the Women’s Section of the Alabama State Bar Maud McLure Kelly Award. She is a Fellow of the Alabama Law Foundation. Other recognitions include the Alabama Women Who Shape the State, University of South Alabama Alumni Association Outstanding Community Partner and Yellowhammer Women of Impact.

Ludgood volunteers with Big Brother Big Sisters, the United Way of Southwest Alabama, and Friendship Missionary Baptist Church in Crichton where she is a lifelong member. She is guided by her faith, which demands service to humanity. Her husband, Carlos Williams, is a federal defender for the Southern District of Alabama, and her partner in life and service to the community.

Founded in 1830, Spring Hill College is the oldest Catholic college in the Southeast and the third oldest Jesuit college in the United States. Spring Hill combines the Jesuit tradition of excellence in education and a commitment to caring for the whole person – mind, body and spirit – with innovative educational experiences. Located in Mobile, Ala., Spring Hill's mission is to form leaders engaged in learning, faith, justice and service for life. As a result, Spring Hill students are engaged, inspired and transformed by their experiences. 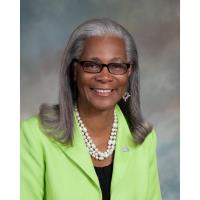