GULF SHORES, Ala. (April 15, 2022) — White-Spunner Construction, LLC, (WSC) is pleased to announce that the recently constructed Air Traffic Control Tower at Gulf Shores International Airport (JKA) has been awarded the General Aviation Project of the Year Award by the American Association of Airport Executives(AAAE).

The tower consists of nearly two million pounds of concrete, over six miles of copper electrical and communications wiring and stands 95 feet tall. It contains a state-of-the-art communications system that allows aircrafts to connect with tower controllers from more than thirty miles away.

“It’s not often you are able to work on a project that is such a great addition to the community and local economy,” noted Craig Blackburn, WSC’s Vice President of Operations. “The project’s success is the direct result of our phenomenal team at White-Spunner, project subcontractors, the design and engineering efforts of Barge and AJT, the determination of airport manager Scott Fuller and diligence of representatives of the Gulf Shores Airport Authority.”

Officials say the tower has been exceedingly helpful in creating a safe airspace and streamlining operations at the second-busiest airport in Alabama. 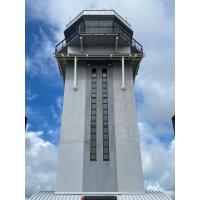