Daphne, Ala., June 6, 2022 – Bayside Academy’s Patrick Daves ‘22 was recently chosen by the Mobile Optimist Club as the 1A-4A Athlete of the Year for the 2022 outdoor track & field season. A 17-time individual state champion and two-time team state champion in indoor and outdoor track & field, Patrick has no doubt left his mark at Bayside Academy. Patrick holds 13 school records and one state meet record, and he is currently a two-time All-American. Patrick will compete in the Brooks PR Invitational and New Balance Outdoor Nationals in the 110 meter hurdles later this month.

Patrick's brother and sister, Michael Daves '14 and Meagan Daves '17, along with Coach Joe Swagart, attended the luncheon on May 26. Both Michael and Meagan competed in track & field, particularly the sprint hurdle events. Patrick has been strongly supported by his father and mother, Michael and Ashley Daves. We wish Patrick much success as he competes for the University of Alabama next school year. 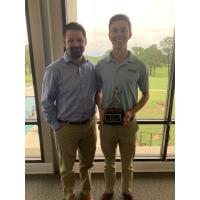